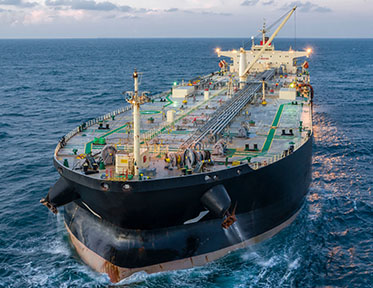 On December 7th 2022, Idwal was once again joined by the Standard Club and the Seafarer's Happiness Index where we posed the question: What makes a happy ship?

In this series, we are exploring the factors that contribute to the happiness and well-being of seafarers on board a vessel. Joining us as always are experience ex-seafarers and maritime professionals Yves Vandenborn, Steven Jones, and Thom Herbert, who shared their insights and expertise on the topic. Through their stories and experiences, we hope to shed light on the challenges and opportunities that seafarers face and how to create a positive and supportive working environment on board ship. So come along with us and join the conversation about what makes a happy ship!

Catch up on the full video below or read on for some of the highlights of the panel.

An update from the seafarers happiness index

The Seafarers Happiness Index, for those of you who don't know, is basically a survey of sentiments that we run throughout the year. Every quarter we report back on what seafarers tell us about a range of kind of core issues across ten questions we ask the global seafaring population. I think through the past couple of years, obviously the COVID impact has been immense and we've termed them the 'yoyo years' because what we were seeing is very much bouncing peaks and troughs across the sentiment as it looked like COVID was going to hit really hard. Then there was obviously a falling away when things seemed as if they were recovering, then that sentiment would rise as well and we spotted this trend of about three or four different times when it looked like it was getting better, but then it got worse, etc. So really it was very much a kind of emotional roller coaster, really. The seafarers, I think in the past two quarters that we've reported through 2022, the biggest things to say is that there have been improvements in the sentiment, which is great to see and really very welcome because we had been down to the lowest levels that we'd ever experienced or seen. So there's been definite improvements.

Quarter two we were looking at micro level improvements. They were actually on the vessels themselves where seafarers were telling us there was a sense that owners were investing more on their life at sea. Small things like improvements in gym equipment or TV, audio access maybe to connectivity. Small things like coffee machines seemed to be one that's often mentioned as being really important and something that perhaps allows people to come together a little bit more of a focal point. So we noticed those micro trends and then the last quarter report that we had, it was really about an improvement in the wider picture. Things were starting to open up again in some places. Equally there seems to be a lot more reassurance and confidence in when people were going to be able to pay off and actually go home. So those really were the biggest trends across the year. It'll be interesting to see what the next quarter holds, and I would even like to extrapolate on what it might be. Could be that we've reached a high watermark. I worry that there are talks, you know, out in China again, of continuing problems with COVID. So I really don't know. But it's been good to see that when companies invest, that is reflected in the mood and it does lead to improvements.

In May of this year Idwal introduced 12 objective-based questions to further investigated the Crew Welfare conditions onboard vessels. These questions are practical in nature and aim to highlight issues than can be resolved. Why is this an important topic? Idwal are looking to improve the welfare conditions of the individuals running and maintaining multi-million dollar assets that are ultimately responsible for approximately 90% of the world trade. 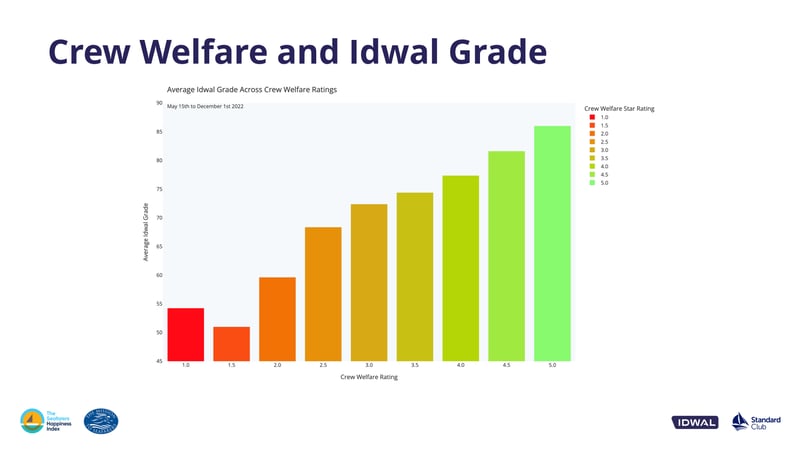 In order to investigate this further it's important to understand the Grade itself. The Idwal Grade algorithm is made up of 21 subsections that are each appropriately weighted – for example E/R and Cargo Holds are higher weighted for obvious reasons.
Crew Welfare is one of the lowest weighted items – this is important as it means the correlation we are seeing is not because the Welfare Grade is pulling up or dragging down the Idwal Grade. The Grading for the Crew Welfare itself has also been carefully designed and calibrated internally to ensure the algorithm is objective and fair.  But does this trend continue when we break the data up further? 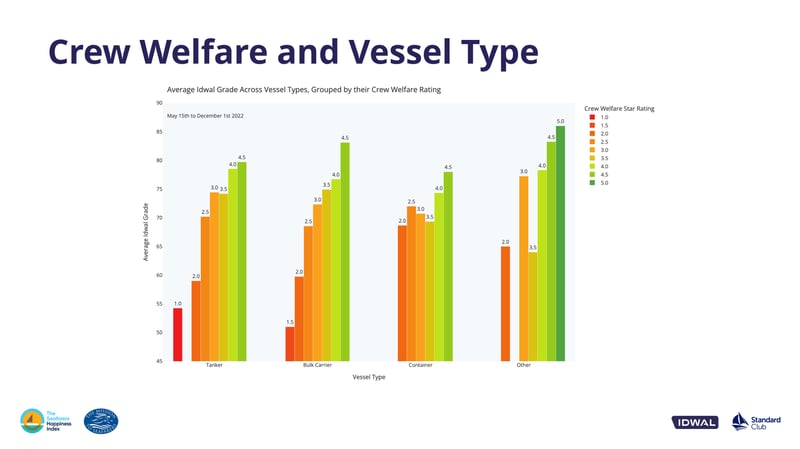 The data is now broken down into 4 generic vessel types – bulkers, tankers, containers and other (ro-ro, offshore, etc)

As you can see the trend between the Idwal Grade, and as such the vessel condition and potential risk, and Crew Welfare is still present This is particularly noticeable for Bulker – were there is a clear increase at every stage - but the trend is noted for all.

This next slide shows a further breakdown into more specific vessel types SR Tankers, Mini-Bulk Carriers, and Supramax Bulk Carriers
Again, the trend is present, We can see that the vessel type is not having an impact – but are there other factors?  In the graph below Idwal has taken 3 Classification Societies to see if they have an impact on this trend – LR, Class NK, and DNV. It should be noted that we are only using the Class societies to further highlight this trend – and it is in no way a reflection on them. Again, this has no impact with the trend still being present. 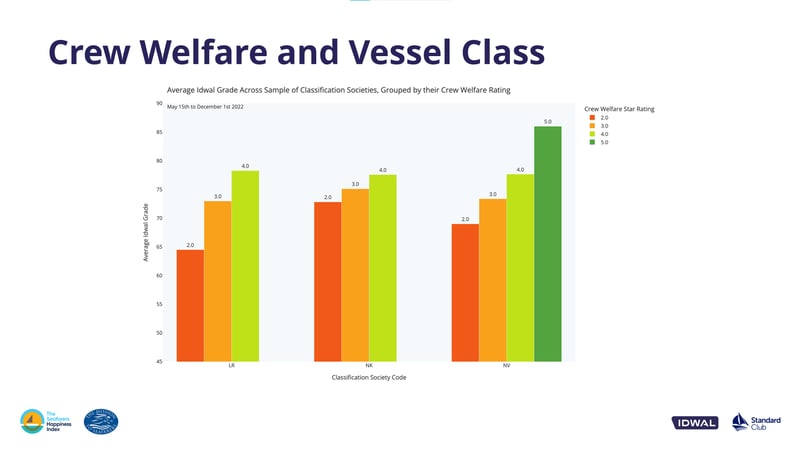 Finally, Idwal took 3 vessel Flags to see if they have an impact – Panama, China, and Singapore. As with the last slide these Flags are only used to further highlight this trend – and it is in no way a reflection on them. Again, this has no impact with the trend still being present. 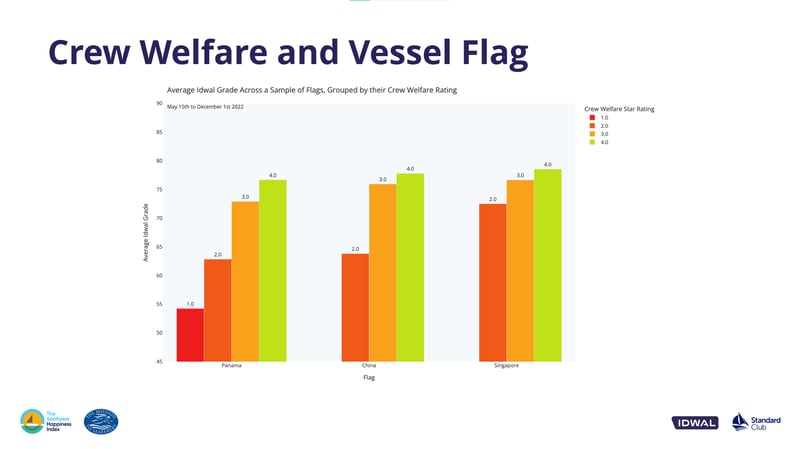 Ultimately this data shows that a correlation is present between the Idwal Grade (and as such the vessel condition) and the Crew Welfare conditions onboard - and when we view a vessel as an asset, as many of you do, this is a risk. The question can be asked as to whether or not the Condition impacts Welfare, or if Welfare impacts the Condition. While this data set cannot give us this answer - ultimately the resolution for either point is the same. If Poor condition leads to poor welfare, then improve welfare which will in turn improve the condition.

In the way that we categorize claims within the club, we tend to attribute claims based on whether it was an injury or an illness. And then we will look at what kind of injury it was or what kind of illness it is. But we tend not to go much further or deeper than that. So as such, we don't have a category specifically to attribute mental illness related claims to. And in that sense, we don't always know whether there is an underlying reason to the claim. Now, what I'm thinking also is that previously, a number of years ago, pre-COVID, etc., there was not that much focus on mental illness claims. So it was just simply categorized as an illness or an injury for us, and we didn't know any better.

Now, with the focus that there is on mental illness overall we tend to see more of an explanation. If we go to a doctor's report for somebody that is signing off, we'll get a reference to mental wellbeing there. So we tend to see the word come up a lot more. It doesn't mean that we necessarily have more claims related to mental illness, but definitely are seeing that the category comes up a bit more. We had an incident added a couple of months ago when a seafarer on shore leave got drunk. And then he started creating trouble when he was coming back on board, he had to be restrained, etc,. He had to be disembarked and a crew change had to be done. So the ship was delayed. P&I had to get involved, etc. I think a number of years ago that would just simply have been categorized as a claim because we have to repatriate the the person. But now we know more and we don't necessarily see the report of what actually happened to this person. And what actually led them to act in that way. On the short side, there must be an underlying reason which I'm sure that our ship owners are looking further into. We don't necessarily see those investigation reports from our site.

So you couldn't really comment on kind of whether this triggers or catalysts on board? You're not seeing that much information?

I guess it's difficult, I think, to really point at something on the the ship that can be a catalyst. I think we all know we all more or less suspect what is the cause. We know the social part, the missing your family part, we know the long contracts, etc., But I don't necessarily have any direct data from our side, which I think other companies like the Mission, which with the Happiness Index or the various help lines that the charities are doing, they get more detail and I know it. Idwal is also producing their own data as well, so that will give more clarity on these issues. 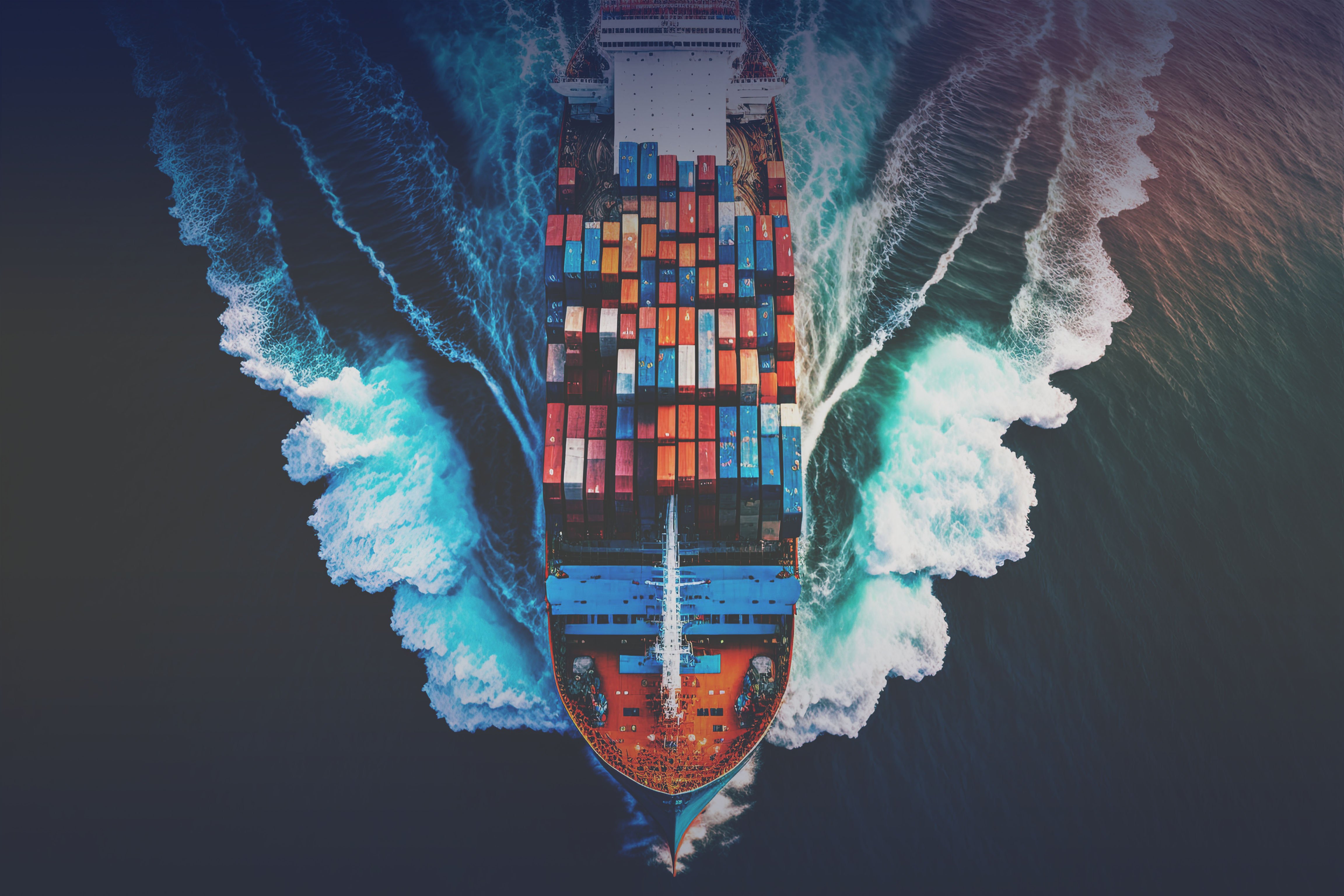 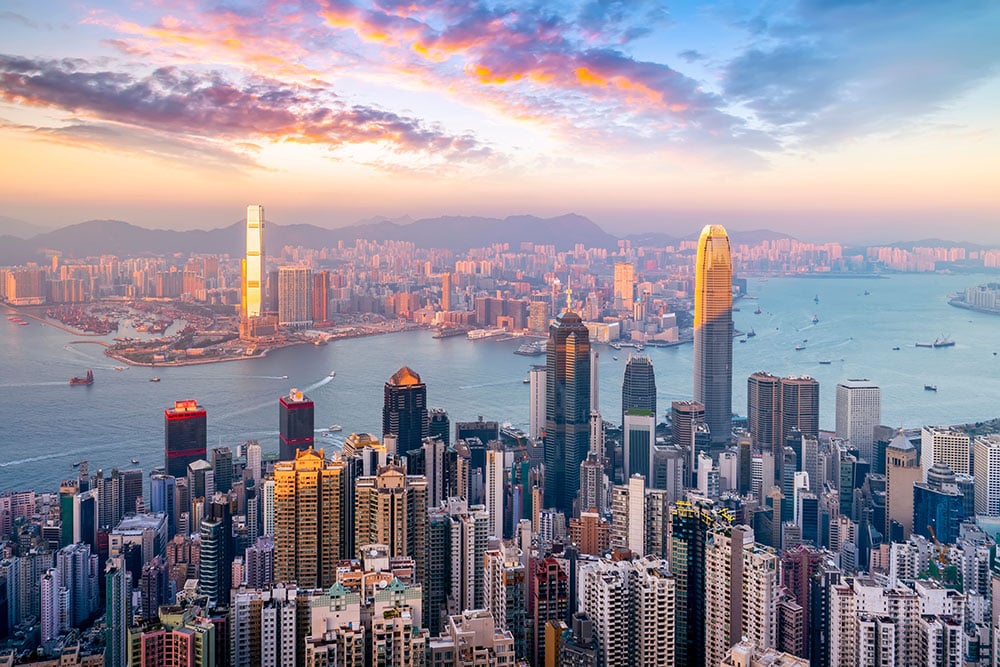